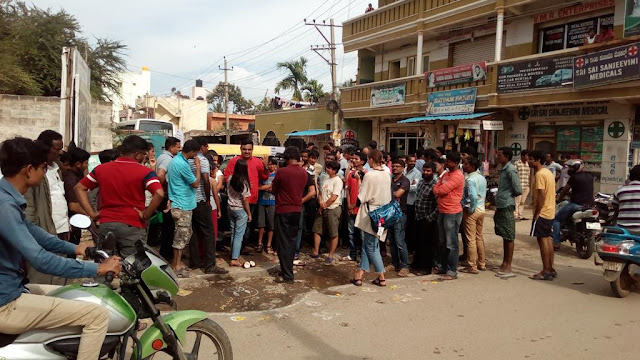 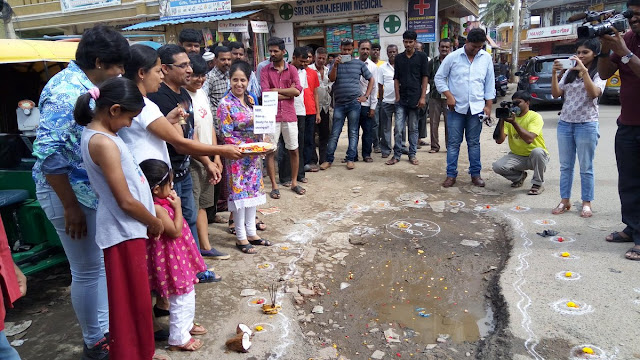 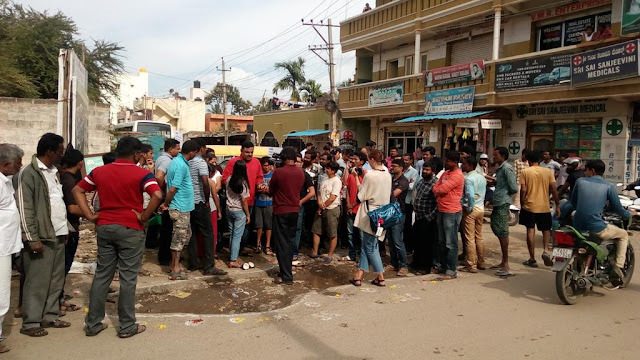 Posted by HaSiRu Mithra at 04:57 No comments:

‪‎PotholePooje‬ was organised by HaSiRu Mithra offering prayers to potholes in HSR Layout not to injure or kill citizens. Sector 2 RWA, Residents, School Children, Walkers, People who were driving through the area took part in the Pooje and prayed for every ones well being.
This was a unique protest against the apathy of BBMP n Elected Representative, even after repeated request the authorities have not taken any steps to fill the potholes or better the road condition.
For over 8 years asphalting has not need done in most of HSR Layout n the increasing bad condition of the roads are posing a great danger for citizens.
We home at least now authorities will take measures and address this serious issue of bad roads in HSR Layout.
Click here for more Pics 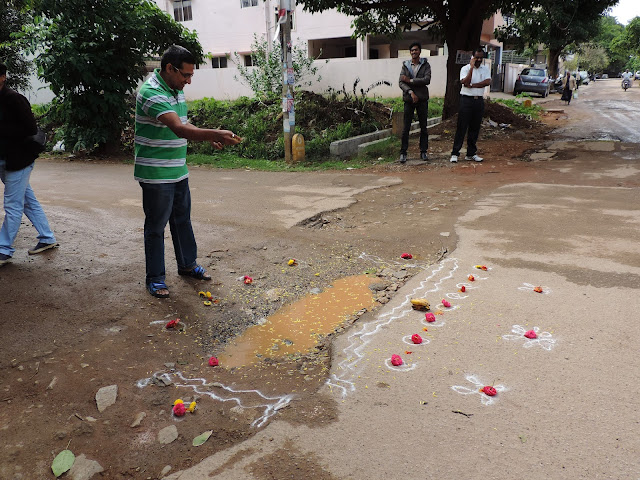 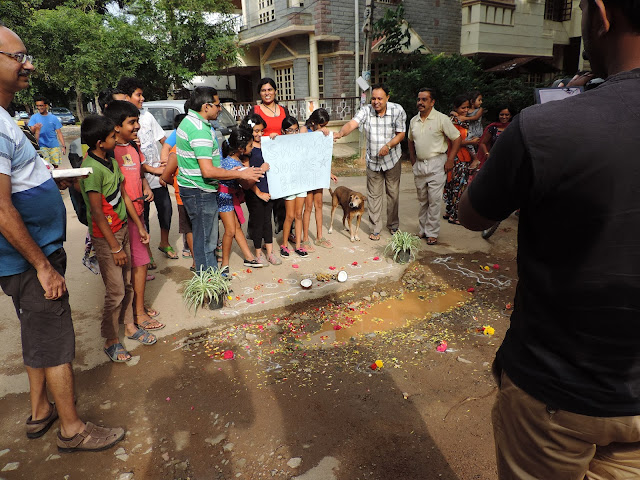 Posted by HaSiRu Mithra at 18:08 No comments: 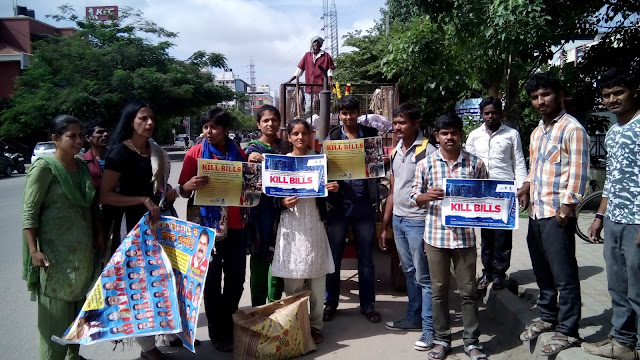 #KillBills is now a citywide event, BBMP & B.PAC on 2nd July took the HaSiRu Mithra initiative across the city with over 30 Wards participating from all 8 BBMP Zones. BCLIP, Civic Hubs, RWAs, NGOs & Citizen groups took on the fight against 'Visual Pollution' to the streets.

Every Ward had a local Team and had identified a distance of 1-2 Kms where they would be removing the Posters, Bills, Banners, Flex etc that were either stick, tied or simply dangled. HaSiRu Mithra has already completed the 27th Main stretch and 17th Cross from NIFT to Nandini cool joint junction, so the choice was obvious and it was decided that the stretch from Nandini cool joint junction to BDA Complex will be taken up.

With volunteers from Govt Degree College the HaSiRu Mithra Team and the BBMP PKs and Staff lead by Mr Vinayak the fight against 'Visual Pollution' started at 7.30am. Everyone seemed more than happy to bring down the ugly Banners, Flex and were seen ripping off the Posters & Bills stuck of Trees, Electric Poles. by 10.00am the #KillBills team reached and cleared most of the 'Visual Pollution' around BDA Complex and the tractor was a full load of ugliness. There is hope that BBMP will file cases against these illegal and ugly Posters, Bills, Banners, Flex that are defacing the locality and city.

HaSiRu Mithra will be submitting a report on list of offenders BPAC which will be then sent to BBMP for action. With more citizen participation and vigil it will not be difficult to put an end to the 'Visual Pollution' in Bengaluru.
Posted by HaSiRu Mithra at 01:11 No comments:

Segregation: It was indicated that during collection all the households who are not segregating waste has to be told to segregate waste and a proper escalation process to be followed in case of non-compliance, and action should be lead by BBMP HI.

It was also discussed that areas like Ibblur, Agara, RG Nagar should be given more emphasis of collections, as regular collection only can lead to reduction in black-spots and increase segregation.

The contractor of Ward 190 expressed his concern that other than the SSPalya area segregation is not happening in the Ward, it was suggested that if zones are created based on the number of households a targeted awareness drive like in SSPlaya can improve segregation.

Zones/Routes: Both Ward 174 & Ward 190 are divided into Zones/Routes with approximately 1000 houses each. This process will help in ensuring that the autos allocated are operated fully and will increase transparency in the collection process. The map of the same will be shared with all RWAs & Groups.

Bins in autos for Wet & Rejects separately: It was informed that Wet waste is collected both in Ward 174 & 190 directly in the auto leading to leaking water content on the roads and creating foul smell. The unhygienic and improper method had to be stopped, and since the rainy season is adding to the issue Bins in all autos has to be made mandatory. The contractors agreed that the Wet waste should not be collected directly but they have problems using the Bins as the transfer becomes difficult and autos may has to do additional trips to empty the Bins.

It was insisted that cleanness is critical and contractors have to find methods to lift the filled Bins to unload to compactor. It was agreed that in 1-2 Zones Bins will be tried for few weeks and the contractors will work on modalities to implement across zones. It was also told that this is an important issue and unless the cleanliness is not maintained no amount of efforts will bring results or satisfaction among residents.

Audio: It was insisted upon that there has to be an Audio/announcement system that makes basic announcement about segregation and that it’s mandatory to segregate. Both the contractors have agreed to install Audio system in the autos in 15-20 days time.

Information Boards: It was agreed that all autos will have A4 size sticker that will include Zone/Route #, Driver name, Driver #, Supervisor #, BBMP HI #, Ward #. It was also agreed that on providing the information the stickers will be sponsored by a NGO.

It was also told that all the autos should have pictorial representation of Wet, Dry, Reject waste Bins and 2-3 lines in Kannada & English about Waste Segregation, it was agreed that basic design will be provided so that it can be painted on both sides of the autos.

Information handouts: There will be a handout/poster designed with Zone/Route #, Auto # Driver name, Driver #, Supervisor #, BBMP HI #, which will be shared with all RWAs, Groups, Citizens so that there is access to information and people can interact with them directly. Direct interaction of the citizens will also help in relationship building and better the quality of segregation.

Transfer point: Is a concern, with the ORR in front of Freedom School as the Transfer point the park and the area around is affected, the schools around have expressed displeasure due to the stink and the monsoon is adding to the misery and making the entire place unhygienic. An alternate Transfer point has to be considered, there are limited options but unless the transfer is not in a closed environment the random dumping will continue. Even though the Ward 174 contractor is getting it cleaned, the place is ending up as a black-spot and also spreading to the mini forest. This issue is still open and some thinking should go into this so that there is a permanent solution.

Sweeping: It has been noticed that both ward 174 & 190 road sweeping is not done on a regular basis, more so Ward 174, the contractor & BBMP Hi agreed that it is an issue that is pending and will be addressed shortly.

Point clearance: Many spots in Ward 174 & 190 are re-appearing every day, eg 7th Cross, 27th Main, Hosapalya bus stop and road behind Agara Govt School are some highly visible ones. It was agreed that just cleaning everyday will not address the issue, there has to be plan/solution that is long-term. BBMP HI suggested that weekly drives with citizen involvement, putting up few benches, planting few trees and getting a street vendor is occupying the black-spot will eventually erase the black-spot. It was also agreed that we will take up 7th cross point and beautify the place on a trial basis. 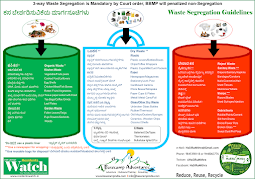